It shouldn’t be necessary to preface just about everything with a disclaimer. However, there are people out there who are determined to take offense to everything or make it about them so we have to encase everything we say in the softest of pillows or the sweetest of coatings to make it palatable. I’ll say this: The following is based SOLELY on my personal experience. I’m sure that others have had their own issues, results, experiences, etc… Kudos to you. I’m not here to debate any of that. I’m just here to explain how things went for ME. Got it?

A good amount of independent authors are their own one-stop-shop. Obviously, we are the creative force. We often are also our own editor, cover designer, and advertising agency. In the latter case, if creating our own Twitter or social media ads doesn’t quite accomplish what we’d like, we look into outside sources that are reasonably priced and (hopefully) effective.

I have personally tried a few different options. In addition to book trailers and ads I’ve made myself, I have also done a couple of promotional interviews on blogs, engaged the services of companies with large Twitter followings to ‘blast’ ads for my books at regular intervals, and even employed a company to get me in touch with readers who would be willing to provide reviews on Goodreads in exchange for promotional copies of my books.

Let’s get to the meat here. Which of these did and did not work for me and why? It’s likely that anyone reading this would want to know first which I personally regret doing so we’ll get right to that. Out of the above-mentioned options, the one that ended up being a terrible waste of my time was exchanging copies of my books for those willing to submit a review on Goodreads.

The deal was that I’d receive 100% guaranteed and honest reviews for my novel(s) on Goodreads, with varying packages available depending upon how many reviews I wanted. I selected the “mid-range” package, which would guarantee twenty reviews on Goodreads (and since it was for two books, it was to be split as ten per), with five months delivery time. That meant that in five months max after initiating the process, I was guaranteed twenty reviews combined for both my novels. There was a ‘pandemic promotion’ at the time, so the usual $300 price was reduced to $200, and I could make four monthly installments of $50 each.

Here is where things went left. The premise is excellent. Connecting authors who need reviews with bookworms who enjoy reading is a beautiful thing. HOWEVER, where this process went wrong is that most of the said bookworms were not properly vetted. I had to report at least two of the reviews received because they contained spoilers. One of them even blurted out the twist in one of my novels. I feel that every review submitted should have gone through some sort of quality control before it could be posted because once it’s there you’re stuck. Sure, they can shove a blur up with “Contains Spoilers,” but you know people are going to click that out of curiosity.

Yes, there needed to be reviews of the reviews.

Let me make this clear: While I think that both of my novels are fantastic, I am aware enough to know that not everyone will feel that way. I did not initiate the process expecting to get 4-5 stars across the board. I also get that there are some that don’t quite ‘understand’ my work (which was a comment in a two-star review I received). What is not acceptable in any way, shape, form, or fashion is the lax manner the company – take note that I’m putting this on the company and not the reviewers themselves – utilized in finding people to read my work and write the reviews.

I mentioned before that I was making payments on the $200 contract. The contract was initiated in August of 2020 with the initial downpayment of $50. I didn’t get ‘matched’ with a reader for two months. By October, when I had only one payment remaining in the installment, I only had four reviews out of the twenty I was contracted for. I let the first month or so slide because I’m intelligent enough to realize that they probably wanted to make sure they were getting paid first. Why give me all 20 reviews by the first month or two – I could just as easily cancel the payments afterward, right? But, with one month remaining in the installment and then another month after that before their own ‘delivery guarantee’ would expire…shouldn’t they be doing something more?

Then there was The Spreadsheet Incident. This company provided me with a link to a shared Google document that was meant to track the number of reviews completed and the information of the individuals to whom my novel(s) had been sent. After about six weeks I was locked out of it with no explanation, something that was annoying but I’ll give them credit for having fixed it rather quickly. They also tried not once, but twice, to send me the same contact info of an interested reader two times… and tried to deduct the ‘extra’ from my overall total of twenty. Since I didn’t trust them with the spreadsheet since the last mix-up, I was keeping one of my own (in addition to tracking the outgoing emails of those I’d already sent the novel to), and immediately informed them that they were, essentially, double-booking me…pun intended…by requesting that I send a copy of my novel to the same person more than once.

Lastly, there was a clear lack of communication within this company. After being with them for a few months already, I began receiving DMs on Twitter from other handles within the same company – representatives, if you will – asking if I’d like to take part in their service. “I’m already signed up,” came a rather brusque response from me as I wondered just what I’d gotten myself into. How do you not already know this? Do you not talk to one another in that place?

By the time the contract ended and the delivery guarantee had elapsed: 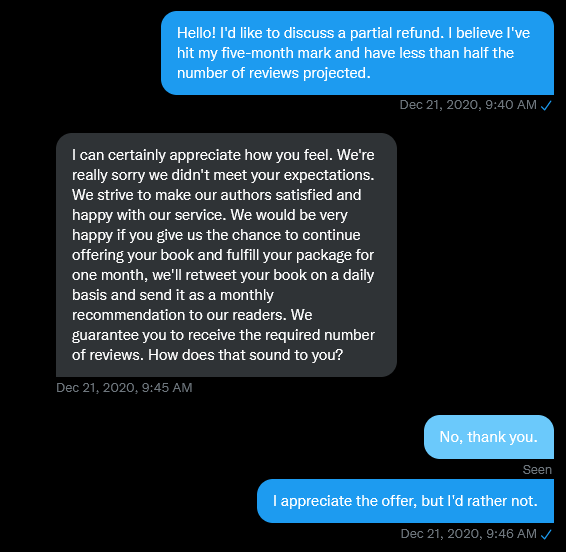 “…we’ll retweet your book on a daily basis and send it as a monthly recommendation to our readers.” What the hell was I paying for over five months, then? “We guarantee you to receive the required number of reviews.” That was something they claimed to have been doing all along. Why was this being presented like it was a new service or an added bonus to keep my business? You couldn’t even get this done in five months so I certainly didn’t want to be on the receiving end of anything you suddenly rushed to do in one.

My time was wasted for five months and the quality of reviews I received – on average – was subpar at best. There were a couple of good ones in there, even the ones that didn’t necessarily care for the book – but, the rest…

In the end, I received most of my money back and an interesting lesson in what it might take to get my book ‘out there’ for people to read. As I said before, the premise was wonderful. The execution was trash. Whether I’d ever give it another shot – with another company, obviously – is something I haven’t yet decided upon. Frankly, I’m too busy writing my next novel to focus on it too much. I find that I’m receiving more engagement and exposure from my own ads and book trailers. Maybe I should continue to stick with that.

Published in Informational and Writing